Adrian Frutiger (1928-2015), the Swiss typographer, designed the Univers  typeface, which you have seen everywhere but never noticed. Which is how a good typeface should be. The Univers family of 20 fonts, cleverly related by weight, slope and width, is rational, versatile and comprehensive. Frutiger abandoned the conventional desciptions of “bold”, “condensed” and “italic”, and numbered the typfaces on a grid sytem. Univers 55 was the standard font for text, 65 the bold version and 56 the italic. Frutiger designed it at the high tide of modernism when decoration was taboo. It was a typeface for every need. You didn’t need fancy fonts. There were superb books, brochures, posters and catalogues set entirely in Univers.

City of Westminster street signs. A condensed Univers font with letter spacing in the name.

It was produced by the Deberny and Peignot foundry in 1957 and licensed by the Monotype Corporation. It’s hard to imagine now that such a modern typeface was made to be cast, but it was the first to be designed for both hot metal and film production.

It was a designer’s font. I’d be annoyed when I specified Univers and the printer did the job in Gill Sans. Gill was an eccentric typeface: it was really a Roman typeface without serifs rather than a true sans-serif (look at that lower case g like a pair of spectacles). But Gill is more suitable for post-modern typesetting and (apart from City of Westminster street signs) we don’t see Univers much now. Ariel, the standard, bland typeface for screens, has pretty well replaced it. 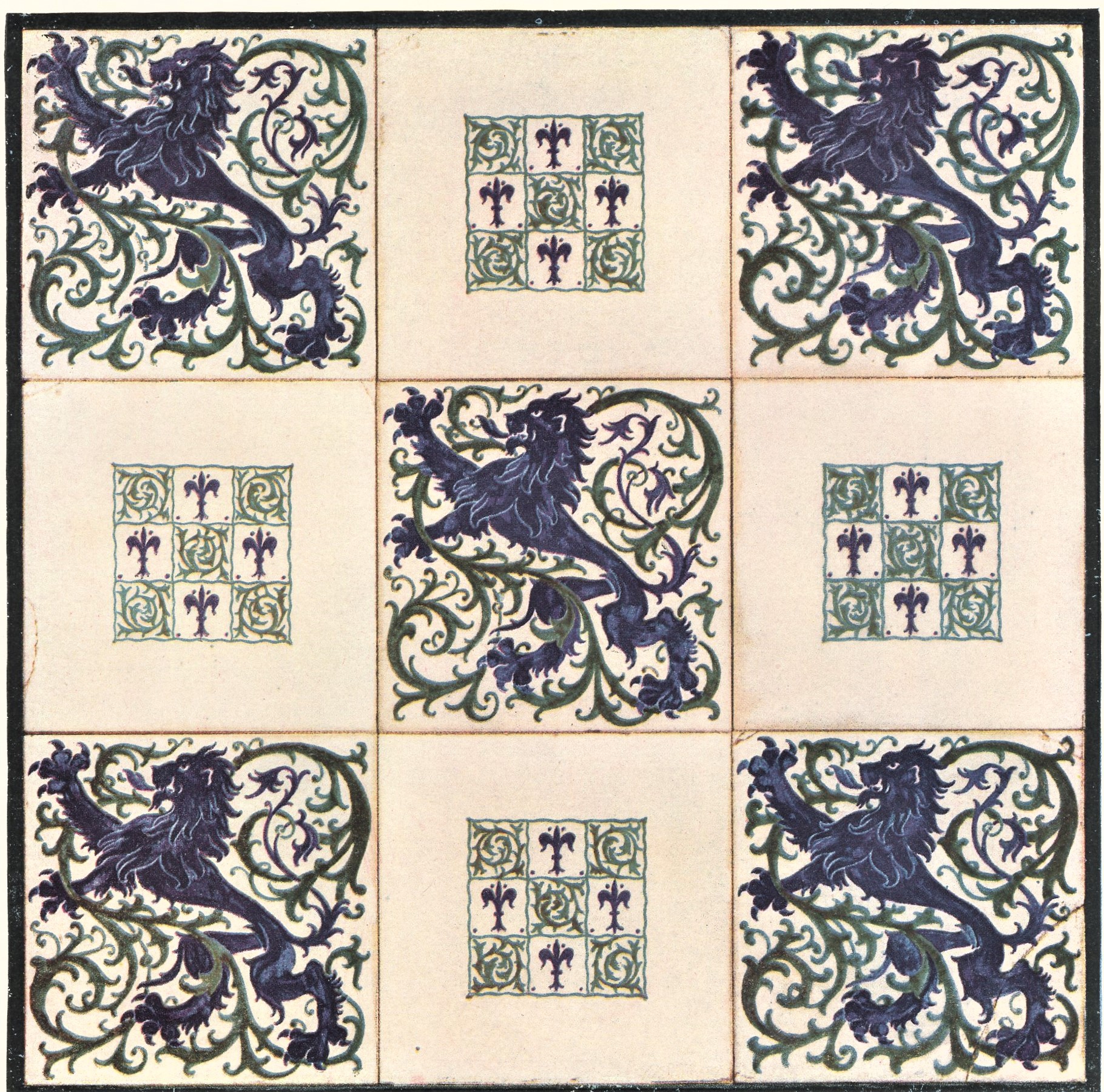 Stuart MacDonald, in The History and Philosophy of Art Education, says little about the art schools in the 1920s and 1930s, turning in those decades to theories of child art, but he does comment that the Arts and Crafts approach persisted until the Second World War, which I think is generally agreed.

The plate above, from Charles Holmes’s Arts & Crafts: A Review of the Work Executed by Students in the Leading Art Schools in Great Britain and Ireland, is typical of the work that was being done in 1916. The tiles were made by Reco Capey at Burslem Art School. This talented pupil did similar work for Doulton’s at the same time as he was a student there. Capey, who is perhaps best known for his designs for Yardley, was appointed chief instructor in design at the RCA in 1925, where he worked under the traditionalist E. W. Tristram for ten years.

These items by Capey (above), sold at Christie’s in 2014 , show how decidedly he had left behind the Arts and Crafts in his professional life and how enthusiastically he embraced Art Deco. In an article “Design in Everyday Life”, which he wrote for the Journal of the Royal Society of Arts (23 February 1940), he expressed a firm commitment to modernist design (below). He was undoubtedly a modernist influence at the RCA, where he worked with Paul Nash. Capey’s and Nash’s appointments look very much like an attempt by Rothenstein to counterbalance Tristram’s medievalism. 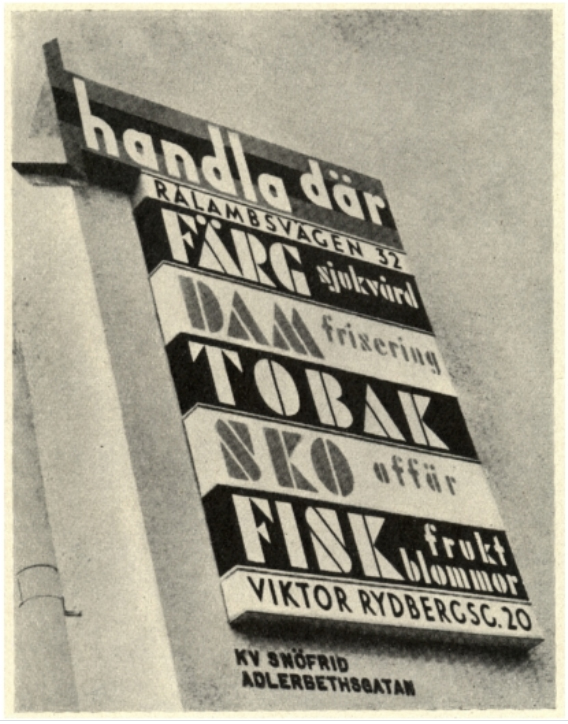 William Johnstone, a key figure in the modernisation of British art schools, says in his memoir, Points in Time, that, when he took over the Central School of Arts and Crafts after the war, the crafts were in his opinion too geared towards the Arts and Crafts Exhibition Society “and not enough towards present day living”. He decided that John Farleigh, head of book production, was blocking change, got rid of him and appointed Jesse Collins in his place. Collins had taught book production part-time at the Central in the 1930s, where he was one of the few teachers aware of the Bauhaus. He helped Johnstone to introduce Bauhaus methods at Camberwell and also did so at the Central after the war.

Between the wars, pottery at the Central had been taught by Maggie Hindshaw and her strong-minded assistant Dora Billington, who was actually the driving force behind the course. Hindshaw had worked in Alfred and Louise Powell’s London studio and her work never strayed far from their their orbit. Billington had worked in a similar style, but when she encountered the pottery of William Staite Murray and Bernard Leach in the 1920s, she appears to have undergone a Damascene conversion and by the early 1930s decorated earthenware at the Central had been replaced by bold, simple forms whose appeal derived from glazes and kiln accidents rather than brush work. Studio pottery’s relationship to modernism is complex and ambivalent and although it can be described in modernist terms – functional, unornamented and anti-historicist – its ideology, largely the creation of Bernard Leach, was anti-modern, anti-industrial and anti-intellectual.

The complexities of the period are illustrated by the fact that many of the figures in this narrative were at once modernist and associated with the backward-looking Arts and Crafts Exhibition Society. Capey, Farleigh and Billington were all its presidents in their time, and Johnstone, despite his disparagement of the Society, collaborated with it and was made an honorary member. Ideologists of modernism, of the stripe of Adolf Loos, Wells Coates and Herbert Read, might be inclined to declare modernism to be not a style but a principle (to adapt a phrase of Pugin’s), but for most artists the opposite was the case. Change in style comes from the accumulation of innumerable influences, adaptations, imitations and alliances. It is unsurprising that artists and teachers in the 1920s and 1930s changed their styles and their way of working, but the change in art schools was slow and gradual. 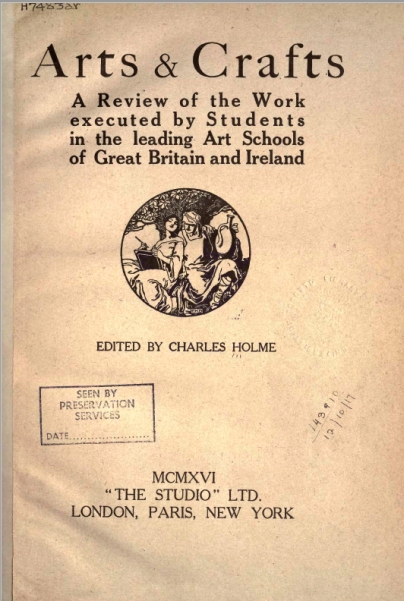 In my last post about the radicalism of Omega designs at around the time of the First World War, I mentioned that the context in which they were produced was the dominance of Arts and Crafts design. Art history focuses on innovation and the history of this period tends to be the history of Post-Impressionism, Cubism, Futurism and Expressionism, so, even if we understand that Omega were designing for a minority with avant-garde tastes, we can easily overlook the fact that the taste of most design-aware people was based on styles developed in the 1880s. 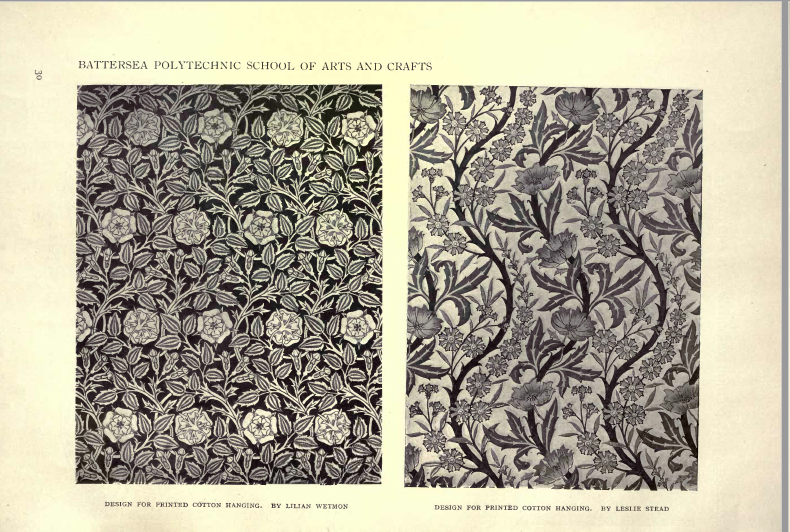 In 1916, Charles Holme, editor of The Studio, published Arts & Crafts – A Review of the Work  Executed by Students in the Leading Art Schools, from which the illustrations here are taken – a fascinating record of what students were being taught at that time. Since the 1880s, many art school principals and lecturers had been drawn from members of the Art Workers Guild, and by the turn of the century the Arts and Crafts influence was firmly established. Both style and teaching methods changed, with a new emphasis on “designing in materials” rather than on paper. And as Holme’s illustrations demonstrate, art students were producing nothing like the Post-Impressionist and quasi-abstract designs of the Omega Workshops. 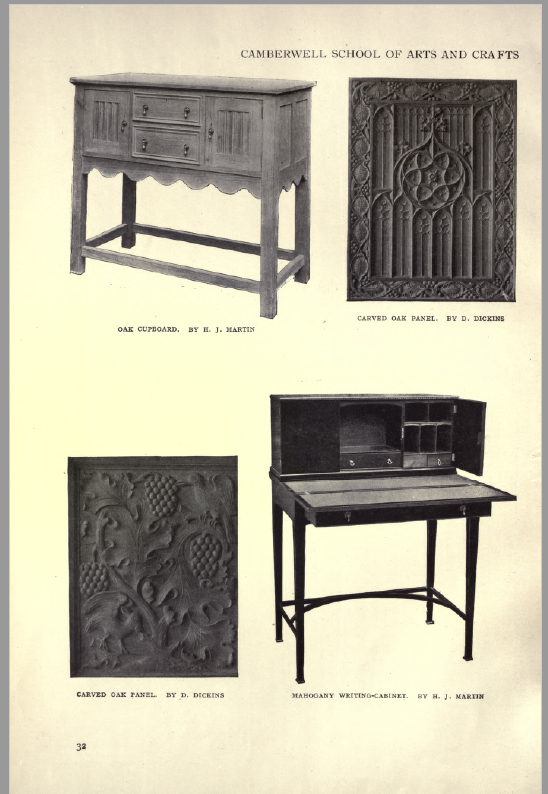 I knew that Parma was the home of a great ham and a great cheese but I didn’t know that it was the home of the great printer and typographer Giambattista Bodoni (1740-1813) until I went to the exhibition of his books at the St Bride Library in the City of London, next to St Bride’s, the printers church. (Closes 12th October 2018.) 2018 is the bicentenary of his Manuale Tipografico, published posthumously by his widow.

Bodoni was the creator of the beautiful typeface named after him, a typical late 18th century innovation with a vertical emphasis and a strong contrast between thick and thin strokes. It is particularly good for title pages but was also designed as a book face. Bodoni’s practice was unusual in that he was type founder, printer and publisher, when the custom at the time was for booksellers to commission books from printers, who bought their types from specialist founders. 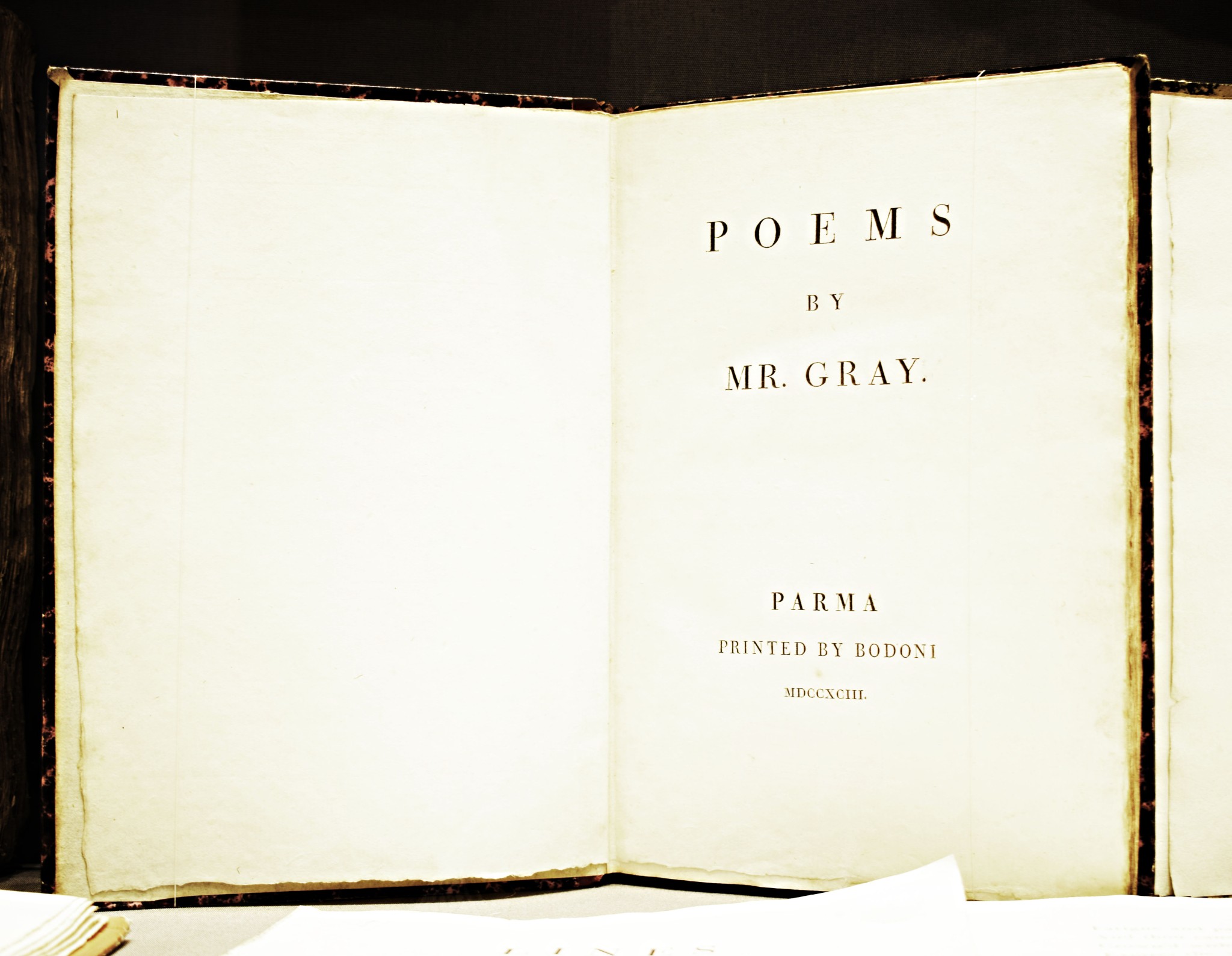 There is a biography of him in Wikipedia – its entries are variable but this account is good. He came from a family of printers and played with his father’s print paraphernalia as a boy. He started young in the trade, showed his brilliance quickly and his fame spread. He planned to come to England to work in Birmingham with John Baskerville, another great type designer, also an energetic businessman and political reformer, but was prevented by illness and went instead to work for the Duke of Parma in a small provincial town in northern Italy. He stayed there for the rest of his life, producing some of the most beautiful books ever printed. His elegant title pages, with few words, lots of white space and little ornament, have the “noble simplicity and calm grandeur” of neoclassicism.

The curator at St Bride’s pointed out to me that, if you didn’t know anything about the history of type, you would think they were printed in the 1950s. I asked him if the books were all from the St Bride’s library. Some were, but most were his. He is a passionate collector of Bodoni editions and keeps his eye on Italian auction houses, going on buying trips several times a year. The Italians require export licences for anything over fifty years old, and after making his purchases he has to wind his way through the Italian bureaucracy to get these lovely editions out. He lives in a world of books. His wife is an antiquarian book restorer and has a workshop cluttered with bookbinding tools she has inherited from previous generations of bookbinders.

Twentieth century type founders reproduced Bodoni’s classic typeface and added condensed and bold forms for titling. To my eye, Bauer’s version is the closest to the original. 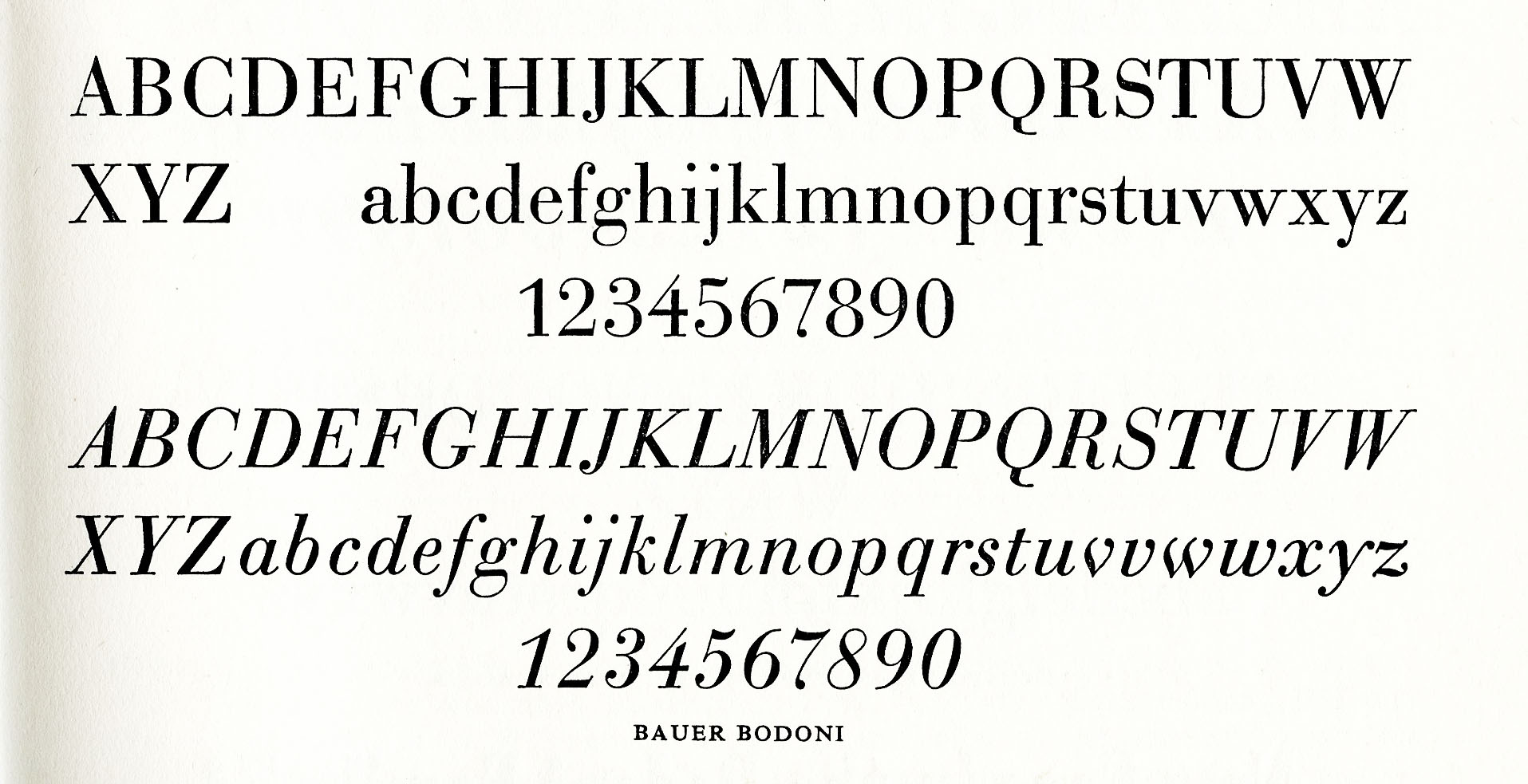 Bauer’s 20th century version of Bodoni, from The Encyclopaedia of Typefaces, by W.T.Berry, A.F.Johnson and W.P.Jaspert (London: Blandford Press, 1958)