I’ve been reading my diary for 1993 when I worked for Luton Borough Council, where I moved from the London Borough of Camden.

Luton was the worst example of callous post-war town planning in England. It was cut in half by the massive Arndale Centre (now called The Mall), where ghosts of old vanished streets lingered in the names of corridors. In the deserted side roads, old trades survived – a grocer with a bacon slicer, a bag and case shop with a window full of jumble, a stove enameller – and an exceptionally large number of nonconformist chapels. I liked Luton, which was untidy, varied, comic and glum. Although it was in the south, it felt like a northern city, largely because of Vauxhall Motors.

The philosophy of town planning was very different in the 1990s from what it had been in the 1960s and the Council was trying to atone for its sins. The district surveyor, who was on the point of retiring when I arrived, told me that the greatest regret of his professional life was acquiring the land for the Arndale. In the town planning guidance of the period, modernism was bad and Victorianism good.

I was reminded how much I liked the town hall. It was built in 1935 to replace the old town hall burned down in the infamous Peace Day riots of 1919, when disgruntled ex-servicemen revolted against their mistreatment and their exclusion from the official celebrations. Although the mayor was lucky to escape with his life, the riots had a funny side when a music shop was looted and a piano pushed out into the street to accompany a rendering of Keep the Home Fires Burning.

The listed building by Bradshaw, Gass and Hope is a mixture of civic classical and art deco, with a Doric entrance and a neon clock. The council chamber is walnut-panelled and lit by cubist pendants and retains original fittings and finishes in timber, plaster and metal designed by the architects. 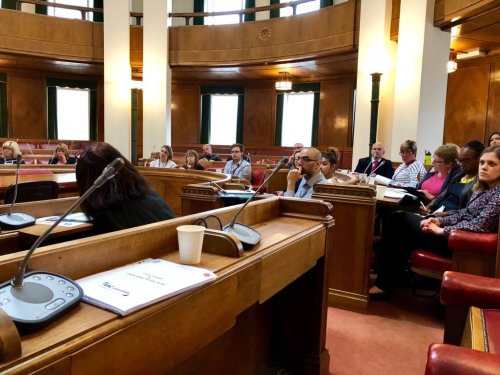 When I worked there, the office doors had PRIVATE in gold letters on frosted glass panels but no name of the officer who worked inside. The building was beautifully preserved and smelled of furniture polish, a welcome change from working in Camden town hall, whose walls were smothered in unofficial placards and whose stairways smelled of piss.