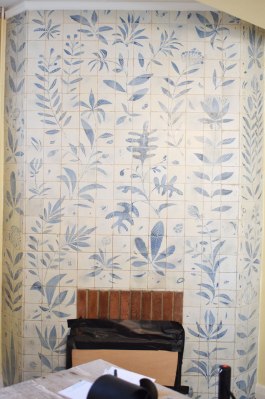 I posted earlier about the discovery under a false wall of tile panels by Nicholas Vergette. I went to see them recently and was bowled over: they are interesting and a beautiful thing to have in a house. One panel decorates a chimney breast, another the lower half of a wall in a sitting room. They are signed “Vergette” and although there are no documentary records I have no doubt that they are by him.

The first panel, dated 1955, is of stoneware tiles, which were probably made by Vergette himself, glazed in a silk-matt white glaze and decorated in a shiny blue glaze applied over wax resist and with marks scratched through (above). Vergette often used wax resist and sgraffito on his ceramics and the blue-and-white colourway is characteristic of his work of this period. The floral design is free and asymmetrical and well scaled for the chimney breast and the small room it is in.

The second, dated 1956, is in some ways more remarkable. It is large, comprising 189 six-inch tiles. It has an eight-colour design with a deep violet and blue-grey background and with floral and animal motifs in royal blue, sky blue, olive green, primrose yellow, brown and red. The background, with the violet cross hatched to reveal grey lines, is original. Vergette painted the motifs first, then covered them in wax and then washed in the dark background. Today we have water-soluble wax emulsion to get resist effects, but Vergette would have used hot candle wax, which is difficult to control and produces noxious fumes – I stopped using it after I almost passed out in my studio. 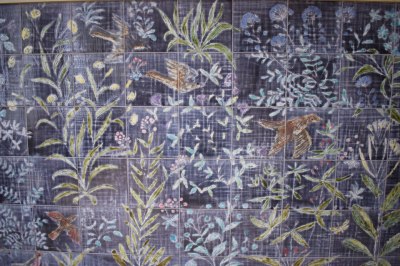 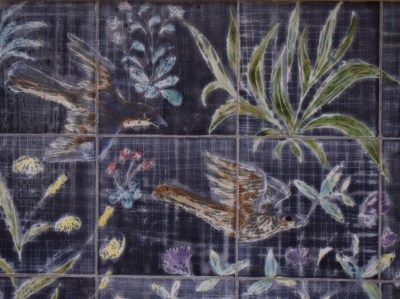 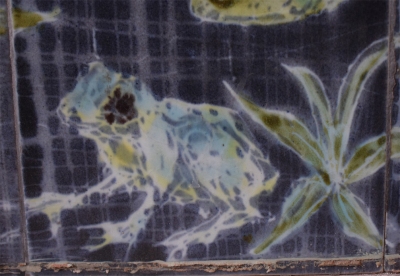 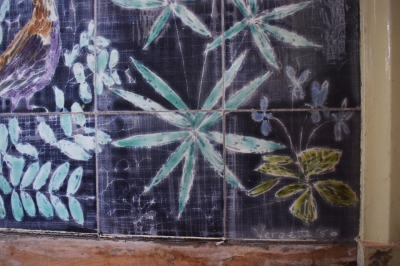 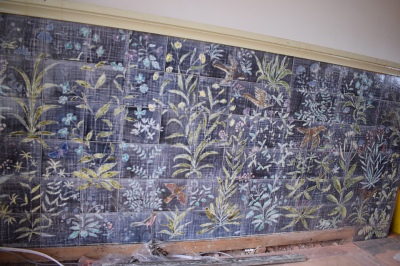 Vergette’s panel is painted on tiles made by Johnson’s of Stoke-on-Trent, probably bought unglazed and then covered by him in a tin glaze and decorated using the maiolica technique. He may have decided at this stage that manufacturing his own tiles was too difficult and that it was best left to a specialist – tile making takes up a lot of space and the problems of warping and estimating shrinkage are considerable. To decorate the tiles, Vergette would have laid them in position on the floor and painted them, then numbered them, fired them and later re-assembled them on site. This way of decorating was illustrated by Kenneth Clark, a contemporary of Vergette, in his book “Practical Pottery and Ceramics”, showing Tony Hollaway at work (below).

At the time he made these tiles (just before he went to America) Vergette was working with William Newland and Margaret Hine in a studio in Bayswater, where they received commissions to decorate the coffee bars that were springing up all over London. Vergette and Newland were also teaching at the Central School of Arts and Crafts. Newland thought that British troops advancing through Italy had developed a taste for good coffee and demanded it when they got home. The coffee bars were certainly part of the Italian wave of the ‘fifties, with Gaggia machines, names like “Moka Ris” and openings by Gina Lollobrigida. The maiolica plates and tiles designed by the Bayswater three enhanced their Mediterranean feel. Newland observed that coffee bars gave young people for the first time somewhere to sit indoors without supervision, without having to drink alcohol and without having to spend a lot of money. By the late 1950s, youth fashion was also Italian-influenced.

Dora Billington, under whom Vergette worked at the Central School of Arts and Crafts, said  in“The New Look in British Pottery” that his work, “though much of it is in the round, somehow suggests a painter’s approach. His best work is evocative, always suggesting more than is actually stated.  … it is good to see him turning seriously to tiles.” Billington illustrates a contemporary tile panel, but its present whereabouts are unknown, if it still exists. Nearly all the decorations made by Vergette and his colleagues are lost or destroyed, and if he ever made any tile panels for coffee bars they no longer exist, so these recently discovered panels are outstanding as the only surviving example of tile work by him. The fact that the polychrome tiles were covered up indicates that they weren’t much valued, and it’s fortunate that they weren’t hacked off.

The details of the commission are unknown, but there is a clue in two artists associated with the Central School who lived near the house, Newland and the illustrator Val Biro. They may have introduced the owner to Vergette.